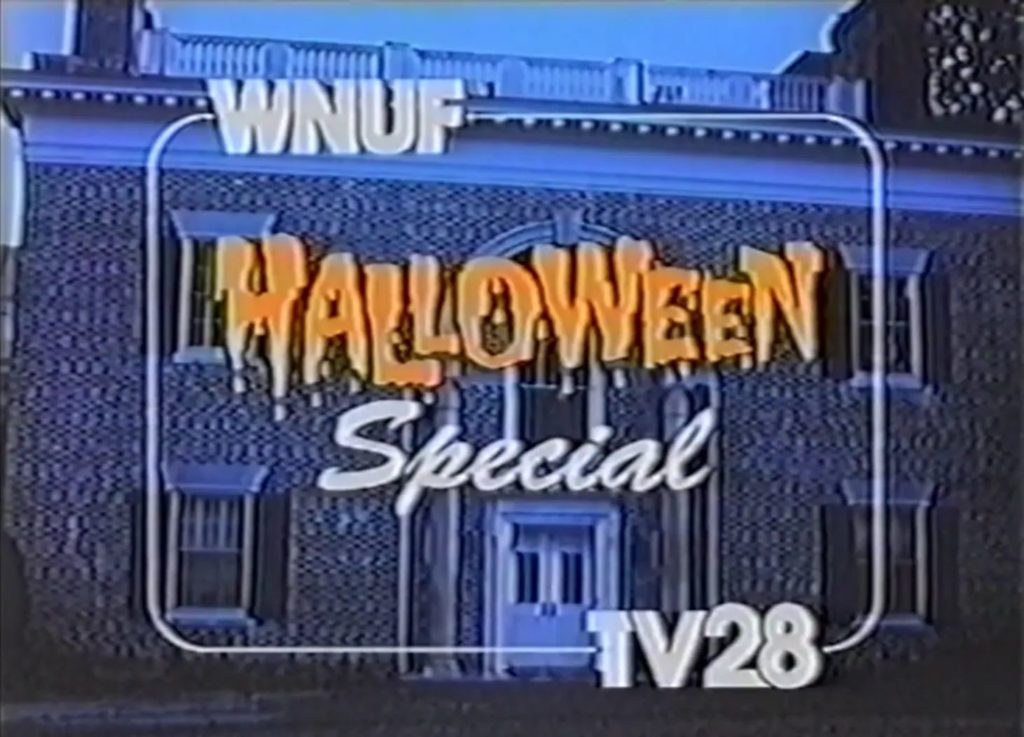 WNUF Halloween Special is one of the best “found footage” films the horror genre has produced in years, which is kind of grim because it was released in 2013.  It doesn’t really matter if the premise has had every drop of ingenuity and decent story-telling wrung out of it.  If it worked once, why not keep doing it until not even the mafia will finance your film?  Given my dim view of other films that mine this vein, the only reason I selected this film on Shudder is because I was doing mindless chores and wanted some background noise. Five minutes in, I understood this wasn’t just another V/H/S.  So I stopped it so I could watch it later and pay attention, and forced Mr. OTC to watch it with me.  Good times.  (By the way, I could only find this on Shudder and couldn’t find it elsewhere to stream, sorry.)

The premise is fairly simple: The news station on WNUF, Channel 28, in some northern town some time in the 1980s is hosting the “first live on TV seance.” We are watching a VHS video someone recorded of the news program that aired right before the Halloween special, wherein we learn about this little town and all its problems. Periodically, the film fast forwards through repetitive or uninteresting sections, mimicking what we all used to do when we recorded network television back in the day, placing the audience in the role of an active viewer of the tape. Interspersed throughout the news and the later seance special, we see commercials that are so absolutely true to 1980s concerns, mores, cultural issues and consumer habits that it was hard not to cringe at how awful the 80s really were. The program for the seance begins after the news, and the audience learns that a son slaughtered his parents in the house, and a couple who are paranormal investigators, a hapless priest, an oily reporter and a cat find out that the dead should be the least of anyone’s concerns.

The only way to discuss this film is to recount both the plot and the running commentary Mr. OTC and I engaged in, as we were delighted and utterly appalled by how much this film got completely right, balancing perfectly between retro cringe and upbeat nostalgia, lampooning and lauding the 1980s.  I’ll swap back and forth between the plot and the best of the commercials, but know that if I could explore every commercial without writing a novella-length discussion, I would.

The film begins with a fast forward through commercials, some of which are helpful PSAs (“Wait! Stop! Think! There’s nothing sexy about STDs!”) and then the news begins.  We meet hosts Gavin Gordon, looking like a young Fred Willard in a vampire costume, and Deborah Merritt, with perfect mom makeup, wearing a witch hat and a saccharine smile. 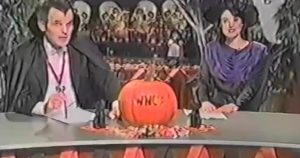 First thing they tell us about is the upcoming special with reporter Frank, and make terrible Halloween jokes.  “No, you didn’t tune into the Transylvania Public Access station,” Gavin says.  Then they give a rundown of the evening’s news stories: a religious organization is praying for the end of Halloween because Satan is bad, the ads in the governor’s race are getting dirty, and they announce Frank Stewart is going to take us along as he traipses through a murder house.

Mr. OTC: Did you see that smile and little shrug she gave him.  You know that wasn’t on the cue cards.  He’s ad libbing and she hates him.  I bet he even bounced the whole Transylvanian cable access joke off her beforehand and she told him she’d strangle him if he did it and he did it anyway to piss her off.

Me: Really?  I got the impression those two are having an extramarital affair.  That’s weird sexual tension, I think.