Why Do I Consider This Book Odd: It’s so over the top and tasteless and reminiscent of the early, irreverent, impolite and extremely fun days of Internet usage, it’s almost old school in it’s approach to gross humor. The font colors, size and unique lettering also required a new bedside lamp and, I’m not even ashamed to admit, a magnifying glass to read.  That was a first, and, I fear, a sign of things to come, when not even progressive lenses will be up to the task.

Availability: Self-published by Flook in 2015, you can get an autographed copy from her website.

Comments: Long-time readers of this site, of whom there are at least three, may remember my discussion of Expiration Date from what feels like last year but was really seven years ago. It was delightfully weird, somewhat silly, made references to The Misfits and basically wallowed in comedic grossness.  I was very charmed by the toe tag Flook sent along with the comic.

Expiration Date: Special Deadition is a re-print of the 2000 issue, with a second part that includes the dark illustrations represented on the cover, along with a page from The Rotten Times, a newspaper that is evidently mostly obituaries and reprinted letters sent to an advice columnist who offers sage wisdom to parents whose shoe-polish consumption results in children needing better toothpaste as well as kids seeking ways to deliberately develop diabetes. I note that one of the obituaries is of a gentleman named “Don Morris,” who also gave Flook a rave review for the 2000 edition of Expiration Date. It’s fun noticing little details like that, little self-referential Easter eggs.  It’s also nice to see that Flook is really fond of her fans.

The comic showcases the antics of Jelly, a funeral home director, and her demented assistant Calvin. Jelly collects genitalia from their dead clients (relatives will ask if you remembered to put Granny’s contact lenses on her dead eyeballs but will never notice if you’ve absconded with her vagina) and Calvin collects boils. 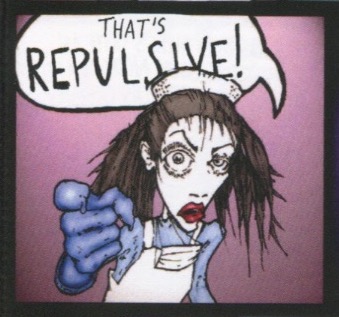 It’s the sort of funeral home wherein people come in to plan the funeral for the baby they intend to kill and MeeMaw may end up looking like Ziggy Stardust in her open casket.  The second part is devoted to the newspaper I reference above, because Jelly attended an autumnal equinox party that left her so plastered that she remained unconscious but uninjured for days after a car accident and is among the obituaries until she wakes up.

Lots of gross humor, irreverent references to child abuse, yet no necrophilia (which would have been too on the nose, I think).  The comic costs $15 plus shipping, which may strike some as a bit pricey for a comic that is around 2/3 reproduced content.  But it’s not like it will be easy to find the first issue anyway so you are unlikely to end up owning both, the illustrations are suitably angular and sharp, given Jelly and Calvin’s edgy humor and use of scalpels, and sort of unlike anything I’ve seen recently, the price is actually pretty good given the production values, and it’s refreshing to come across content that is so utterly unrestrained. 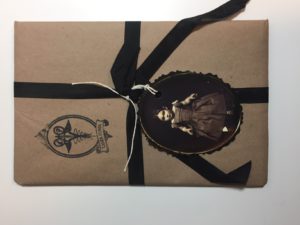 But mostly the real reason to buy this is because Laura Flook is all about the details.  No toe tag this time, but she had it shipped the same day I ordered it and it was impeccably packaged with a very striking gift tag.

I was touched to see the comic was dedicated to her late dog, Trocar, who was Flook’s dog equivalent of my late Adolph. I remembered her dog because I looked up his name when I bought the first edition of Expiration Date (as per the Internet, a trocar is “a surgical instrument with a three-sided cutting point enclosed in a tube, used for withdrawing fluid from a body cavity”).

Plus it’s nice to have the chance to directly support artists you like. Flook has other merch on her site, like face masks, interesting funerary-inspired jewelry, and clothing (if your leggings have embalming instruments on them, who cares if you look a bit sausagey wearing them, is what I am telling myself…).

Shortest entry I’ve written, probably ever, but this is a brief comic.  There are times when the having of media so well-produced and dedicated to a specific craft and sub-culture is equal to or greater than the time spent actually consuming said media, especially when you find the creators interesting in and of themselves.  It’s a comic about a demented funeral director and mortician and it’s really sort of pretty.  It’s worth owning on that merit alone but it’s also funny, gross and clever.

Check back soon for more Oddtober content but until then feel free to recommend your favorite optometrist.