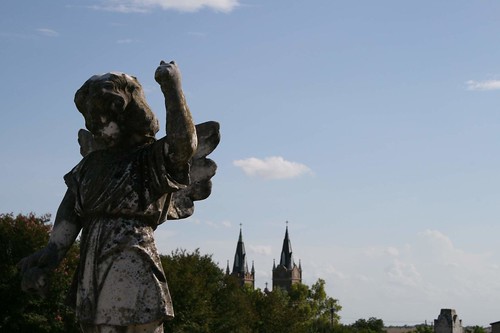 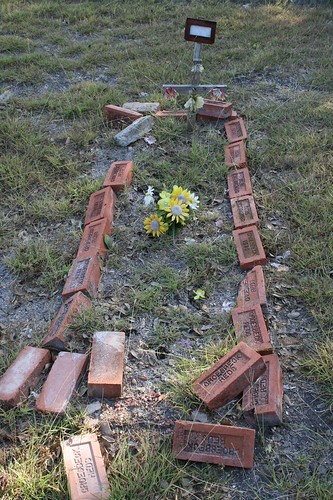 This is what I mean when I say “grim yet comforting.” No idea who is buried here, but someone made sure this plot wasn’t lost to time. Those bricks were a bit scattered but they were clearly new. 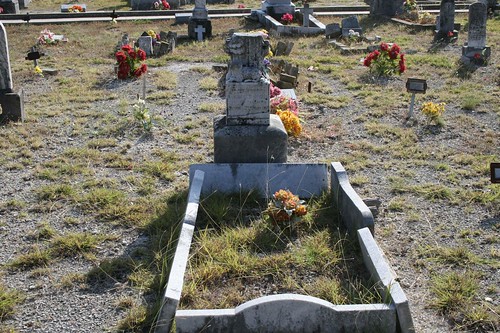 Jozef Kenovec died when he was just ten-years-old and even though it is completely weathered, his stone is very interesting. There is a lamb, representing the purity of a child who died young, and the lamb is sitting in front of what looks like a tree stump. Tree stumps are used to indicate a life cut short. I also share this picture to show the care shown the dead in this cemetery. If a grave doesn’t have fresh flowers or decorations brought by friends or family, the ladies at the church place plastic or silk flowers on the graves. There were a couple of times that had there not been a bouquet of plastic flowers, I might not have known that I was near a burial plot.  His gravesite also shows how many graveyards in Europe and Eastern Europe are arranged – Holy Trinity graves often had borders around them, even when the plots were not very close to other plots.  Most of the older cemeteries that interned people from Eastern Europe feature individual graves with borders, mimicking the manner in which graves are set out in places like Czech Republic, Poland and Slovakia. 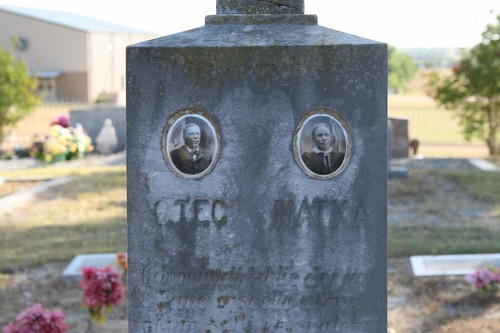 Father and Mother. In a cemetery fairly brimming with interesting graves and stones, I felt drawn to this one. The stone was too faded to retrieve their names. 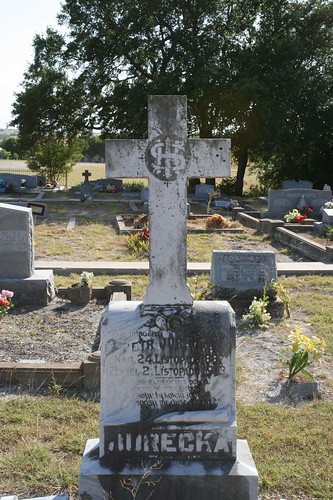 This cemetery had a lot of symbols that were new to me. The symbol at the top of the cross that looks like a stylized S is the symbol IHS, Iota, Eta, Sigma, the first three letters of Jesus’ name in Greek. Often IHS is not this stylized and it isn’t always a reference to Iota Eta Sigma. IHS can also mean Iesus Hominum Salvator, which is Latin for Jesus, Savior of Mankind. The rest of the stone was too faded for me even to try to use a Czech dictionary to decipher. 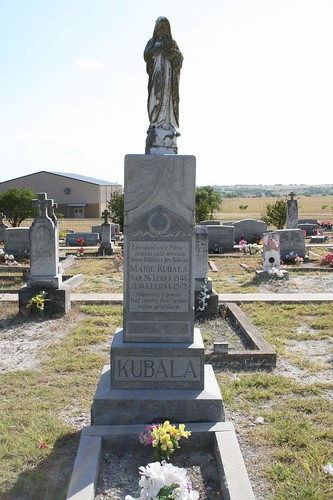 There are several Marie Kubalas in this cemetery, all related. Again, my lapsed Protestant blood was impressed by this stone. Even with the large statue of the Virgin, it has a lot going on. Across the top is drapery, that indicates a pall of mourning.  Under the drapery pall there is a laurel wreath, a symbol that indicates resurrection as well as remembrance. The Czech at the top of the stone translates as “Rest in peace with the Lord, our departed beloved mother, grandmother and great-grandmother.” Other than “rest in peace” I was unable to translate the other Czech phrase near the bottom. 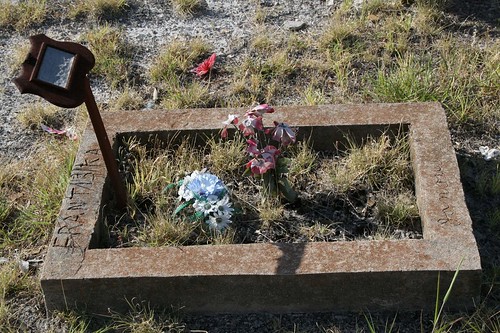 Frantaska Janosec died as a baby. Her’s was one of the few rough-hewn or home-made stones in the cemetery. 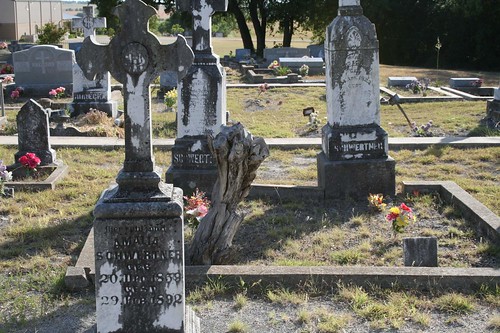 I find myself drawn to this picture because I can’t help wondering at what point the tree growing in the Schwertner corner of the cemetery was cut down or killed. Did it happen naturally? Did someone plant a tree trying to shade their dead family members? Did the tree grow and have to be trimmed down to prevent it from disturbing the graves? Regardless of the answer, there’s nothing like a dead, thwarted tree to remind you where you are – a hot, sun-baked place where the living hope to remember their own dead and possibly thwarted loved ones.

Though a handful of children were buried near their families, Holy Trinity Catholic Church cemetery has what I call a “babyland.” Others call it that, too. Sometimes babylands can feel very sad, little ones separated from their families in death. But then in some cemeteries when children are buried among adults, their little stones can seem so small and lost. I suspect there is no way to bury babies and small children that will not result in people feeling very uncomfortable. 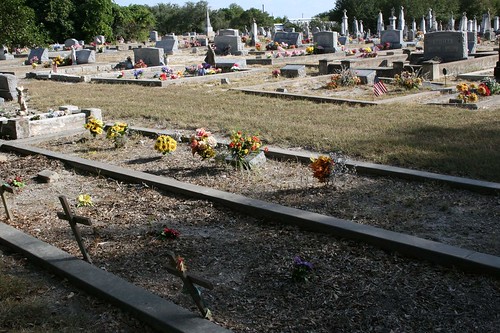 It’s just a framed-out row of dead children, with their plots marked by footstones or small crosses. Other children are buried near this concrete frame in the back, northeast side of the cemetery.

When I look back on the cemetery at Holy Trinity, it can be hard to explain my emotional connection. 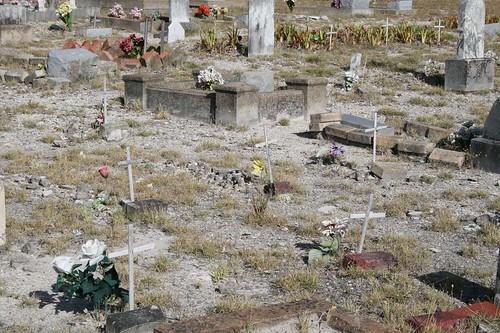 I mean, parts of it are absolutely grim. 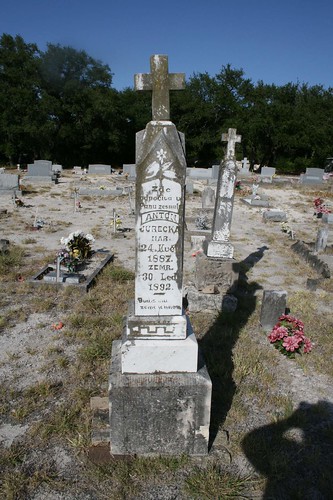 Just hardscrabble, you know. The couple of times the wind picked up, a breeze really, the dust made it impossible to get clear pictures. Despite all the history and customs I learned from these stones, there is no escaping that parts of this cemetery are rather desolate.

If I have to pin myself down, I think I love this cemetery because it was a challenge, forcing me to learn all sorts of new things to be able to know the stories of the people here. It was also the first cemetery I visited that was clearly and unequivocally an immigrant cemetery, or at least it was when the church was founded. This was a place where all the dreams of the New World ended up. 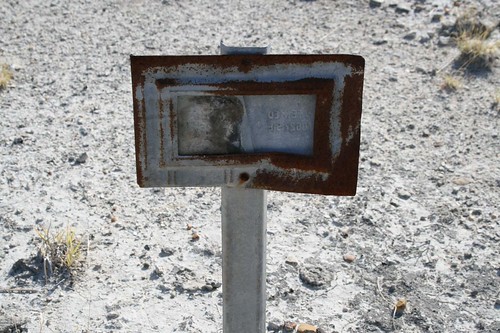 What on earth was Texas like for Czech settlers? I’m sure the mild winters here were a nice change of pace but how did they cope with the unrelenting heat during the spring, summer and fall? The complete lack of infrastructure? Did they feel like they were finally living in a place with infinite possibility? Or did they look out at the scorched earth in July and think, “I want to go home.”

I like to think I am a person devoid of much sentimentality but clearly I’m not. The stories of the dead affect me, and the stories of those at the Holy Trinity cemetery, for whatever reason, affected me the most, as a whole, than those in other cemeteries. Perhaps it is because this cemetery, so full of stories, was so desolate in places. Perhaps it is because I am a sentimental fool with very specific triggers. I’ve been to prettier and more visually interesting cemeteries but Holy Trinity Catholic Cemetery is one of those places that spoke to me in a way that others didn’t.

So again, my experiences in Texas were not creepy, though I suspect at night this could be a very unsettling cemetery. This time I was led by curiosity and ended up a mawkish sadness. If any of you want to see all the photos I took that day, the whole set is on my Flickr account.

One thought on “Halloween Week – My Favorite Cemetery”