Why Do I Consider This Book Odd: Well, Bob thinks he is possessed by the Christian trinity, and he feels it is a very bad thing.  From his possession Bob has come to the conclusion that God treats mankind very poorly and he has tried to communicate this perspective the best he can.

Availability: You can get any number of books Bob Hickman wrote on Amazon.  Here’s the link to the one I purchased:

Bob has a bunch of books under his name on Amazon, many of them with names similar to this book.  I don’t recommend that you order any of them unless you have a special affinity for or find yourself absorbed by reading word salad.  Bob’s book is actually a bit worse than word salad because the print versions have html tags littered throughout.

I don’t know why, but reading difficult texts on e-readers doesn’t work for me.  Paper books make it easier, somehow, for me to take in extremely strange writing.  But a physical book was of no help here, especially since the writing and format degenerated as the page count increased.  I asked Mr. OTC to scan any two random pages to illustrate what I found when I opened the book.  Click on either to see what I mean. 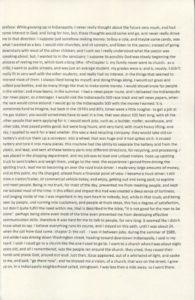 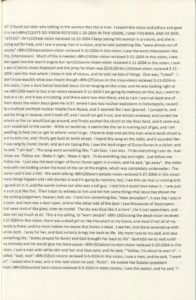 It may be easier for those who want to know more about Bob Hickman to click some of the information links I will include at the end of this article.

Interestingly, I bought a second Bob Hickman title because it had higher ratings, seemed like it might be coherent enough to give me a better idea of what is happening to Bob, but hilariously, even though they are both self-published books on occult topics written by white men with a ballpark similarity in appearance, they are not the same person. I will set Messages from Rose by Bob Hickman, A Psychic on the Edge of the Etheric aside for another time I feel compelled to delve into occult messages from non-planetary entities.

Comments: Hopefully it is clear that I intended to read Bob’s book about being possessed by the Holy Spirit but there’s no sense in it because he’s very likely suffering from some form of mental illness that causes him to process and express reality in a manner one would need a trained mental health professional to understand.  I’ve said in the past that I often approach certain non-fiction books or manifestos from the perspective of someone who analyzes literary characters.  On a very basic level, if you’ve been trained to detect literary quirks and signs of mental illness in fictional characters, you can sometimes do the same with memoirs and similarly autobiographical writings. But such approaches only work when the non-fiction work is constructed by someone who, though possibly mentally ill or afflicted with some sort of strange personality, is no grounded to what the consensus labels reality.  Bob is not grounded to a reality I recognize and therefore I cannot dissect his words.

His book is over 100 pages of strangely punctuated stream-of-consciousness, margin to margin, in eight point font, with lots of html tags that push even the most dedicated observer of the unusual too far.  After five pages I gave up and all I can say from those five pages is that when he was a young man in Indianapolis, Bob was lonely, and in search of purpose he went to a church and was baptized. After that baptism Jesus began to appear to him to tell him to write down certain things and release them in books. The things Jesus asked Bob to do caused Bob to become isolated from his fellow man and he does his best to remain tethered to us while sincerely trying to do what the spirit in him wants him to do because he feels that doing so is the best way to alert mankind to the real horrors of what the Trinity are going to do to us.

Some think Bob is a scammer, but if he is, this is a long-term scam that has very little social or financial payoff.  Those more sympathetic to Bob think he is a paranoid schizophrenic, and they may be right. His wall of text, stream of consciousness writings don’t fall completely into what I have come to expect from unmedicated severe schizophrenics, but he comes close.  Had Bob started reaching out with his messages from Jesus in the 1980s, his missives and tracts would not have looked that different from paranoid musings I’ve received from people who had very unique ideas about the Kennedy assassination, the suppression of free energy and perpetual motion, and interesting theories about how the Bilderbergers were going to genetically mutate corn to turn us all into slaves.  Bob is able to make internal sense in what he is trying to convey, but his narrative skips from one idea to the next too quickly, so quickly even dedicated readers will not be able to keep up.  Worse, one has to have an extremely open world view to be able to give much credence to what Bob has to saw about being infested by the divine.

Being possessed by the Holy Spirit has been a decidedly negative experience for Bob.  On his Facebook group, he wrote the following:

if you didnt feel the spirit of god come into your body, you are still lost. dont feel bad. God attacks me. god is tearing my face and mouth corners all day, by moving my face in different directions, from inside me, ripping and tearing my face. god shoots into my mouth, disease. gum disease is gods best weapon against his people. take their teeth, god told me, and they will want to die. like needles being shot into mouth, coming in continuously. these needles stick in gums, and stick thru long ways, and spew out poison. filling my gums with disease. I put salt in mouth to kill this disease. God fondles me. yes thats right, God plays with, caresses, touches, squeezes, pulls on my dick, and sometimes it feels like a tube inside my dick, and electric tube, moving side to side. Jesus christ appears and laughs and tells me to go back out into the world and commit sin in front of those you witness to, to be abased. theres a warning in the bible, it promises God will betray you. it says God will make it rain on just and unjust. this means give god all and then he will throw you away like he did to satan. but this time, God has a problem. me. God attacked the wrong motherfucker this time. God wanted me to fall and look like a fool, but this time, God will be the one brought down, by a five foot tall man.

Okay, a long paragraph of this is remarkable.  An entire book with no paragraph indentation and font so small I needed reading glasses and a magnifying glass to read?  Yeah, curse these human eyes.

I felt like Bob and his possession by God Himself were in their sad way the perfect inversion of Friday’s look at the world’s sincerest and least dramatic demon exorcism. Placid, kind people drove a spirit out of a young woman I sense was a con-woman and it affirmed their faith in God.  Bob feels occupied by the Trinity and they torture him, revealing to him their nasty plans for mankind, sexually abusing him, making him sick, humiliating him and he hopes to take them down by documenting all they are doing to him and planning for us.

Interest in Bob waxes and wanes, depending on various online factors, and sometimes tricksters online make it hard to know when one is genuinely dealing with Bob, who may have a form of hypergraphia if he is indeed writing across all the platforms I’ve found. Bob is known for sending out texts to various people with the same message (which is a mantra he repeats often in speech): 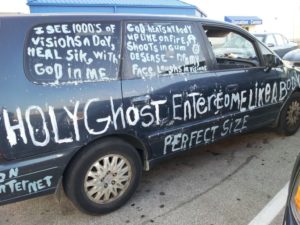 Generally people don’t respond but some have, one asking if Bob is okay.  Bob mostly does not respond to replies.  It was these messages that made people think this is a scam, that Bob is ending bizarre messages to verify if phone numbers are real and selling that data to marketers.  Those texts also caused some to think that Bob is a part of an ARG (alternate reality game).  The notion it is an ARG is also fueled by Bob’s unique van that has become a sort of game for people in his area to identify, but those who approached Bob in his truck, thinking he would give them the next clue in the game quickly realized that this is not a game. But mostly his messages disturb and freak out people and the internet is littered with people asking alarmed questions on Reddit or wondering if they being stalked.

The further you dig, the more you realize this possession really is something Bob believes in and that he really does not enjoy the experience.  He frequently does very self-destructive things, like rubbing sandpaper on his face in an attempt to alter his body so that God will no longer consider it a perfect size and leave.  He also claims God hits him and he keeps records of all of this on his YouTube channel.  By the way, if you search for Bob Hickman on YouTube, you’ll find the etheric psychic, too, so step lively.

The latest upsetting thing I’ve stumbled across is a Blogger account that leads to links of Bob’s work plastered across nation specific Blogspots. Posting as late as October of this year, across around 75 blogspots hosted in different countries, Bob is offering to sell himself for any sexual purpose because “god has the morals of an ally cat” and is a randy God, apparently. Please note that if you click on any of the language specific links, you will be taken to photos of Bob in the nude.  So don’t click at work unless your boss is cool with seeing what appears to be a naked Amish man posing seductively in an attic. In fact, just Googling his name brings up so many nudes. Surf safely, friends.

I hope no one tries to buy him.  I worry he’s trying to fuck God out of him but may be surprised that the God in his body isn’t run off that easily.  But it is undeniable that this whatever is happening to Bob has taken a disturbing left turn down an unsettling sexual road.  His YouTube account is a very mixed bag, with videos ranting about Nancy Pelosi, a short video on his stereo system, Q&A sessions with God, and descriptions about how God is essentially raping him.

Shit.  This is sort of awful beyond just being awful, you know? If you track Bob down online, be kind to him because regardless of what is genuinely happening to him, he is suffering.  I almost wish I could introduce him to the kind Rev. Conn from The Devil Called Collect.  Bob needs a decent man of the cloth in his corner.

Below are some links to a couple of interesting analysis videos about Bob. There are enough Reddit threads about Bob that you could spend many hours wading through his antics over the years. Bob is a rabbit hole so only begin to explore if you have hours of time to spend.

2 thoughts on “God Entered the Body of Bob Hickman, As a Body. Same Size by Bob Hickman”